Hotkeys are set in the manifest file, under the hotKeys section.

Hotkeys will only work in-game, not on desktop.

An example of a hotkeys section from the manifest:

There are two types of Hotkeys we use:

A special hotkey that toggles the application visibility by showing or hiding it.
Few apps are using it, as it's the only action that it can do.

If you are using a transparent background controller (window), a toggle hotkey will not work properly. Please use a custom hotkey.

Defines a custom hotkey to be used by the app.
Most apps are using this kind of hotkey, as it can activate any action and you can customize your app's window behavior.

If you are using a transparent background controller (window), register your app's hotkeys to the onPressed event, in that window.

You can set a hotkey as a "hold" hotkey: a hotkey that functions while pressed down and stops when released, usually used for "ShowOnHold" mode (like the tab key does in some games).

To implement a hotkey which works with a "ShowOnHold" functionality, you should set it as a "hold" hotkey in the manifest, and register to the overwolf.settings.hotkeys.onHold event.

For apps that work in more than one game or global apps there is an option to set hotkeys as global hotkeys.
This option is available from the OW client UI or using the API.

A screenshot from the OW client UI: 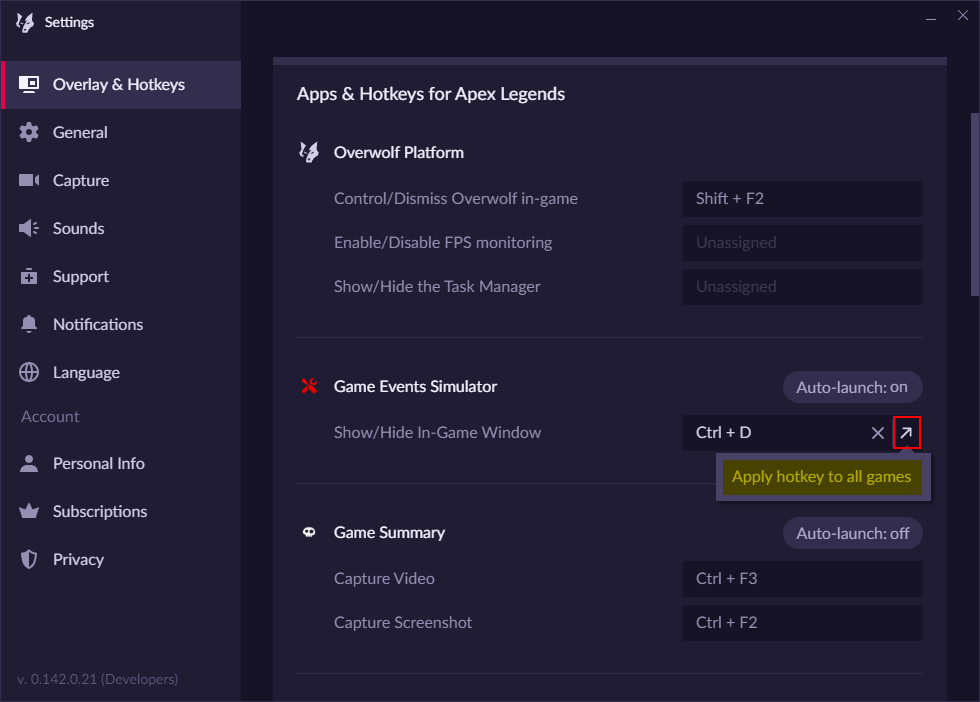 If you "upgrade" your hotkey to a global hotkey through the OW client "settings" page, the client will try to set this hotkey for all installed games on your machine.

Whenever hotkeys are added this way but a conflict exists, the hotkey is added as unassigned.

You can get the list of all your app's assigned hotkeys using the overwolf.settings.hotkeys.get().

Set through the manifest

If game_targeting flag is set to "all", then hotkeys will be set global as default.
Whenever hotkeys are added, but a conflict exists, the hotkey is added as unassigned.

To make it more transparent - there is no way to set a specific hotkey as "global" in the manifest other than set "game_targeting: "all".

If your app was not able to set the hotkeys for all the games, then the user can assign it through the OW client "settings" page or, the dev can set it global through the API.

Get notified on a Hotkey change

Listen to the overwolf.settings.hotkeys.onChanged event if you want to get notified when users change your app's hotkeys from the OW client settings page.

It is possible to reassign hotkeys directly from apps, or, through the Overwolf client settings page.

What you can do is place a direct link to the relevant settings page, into the hotkeys of a specific game settings, using:

Or, you can use the overwolf.settings.hotkeys.assign() and unassign() APIs.

It's possible to even use left or right arrows for hotkeys. To do so, you should use the code Left or Right in your manifest.json.

You can set a hotkey as "passthrough," which means that the hotkey will not interfere with keys from the game.
The key combination will trigger your app hotkey and then will "passthrough" the game.

Example code from the manifest, for a hotkey that set to pass through:

All app hotkeys removed once the extension is uninstalled.